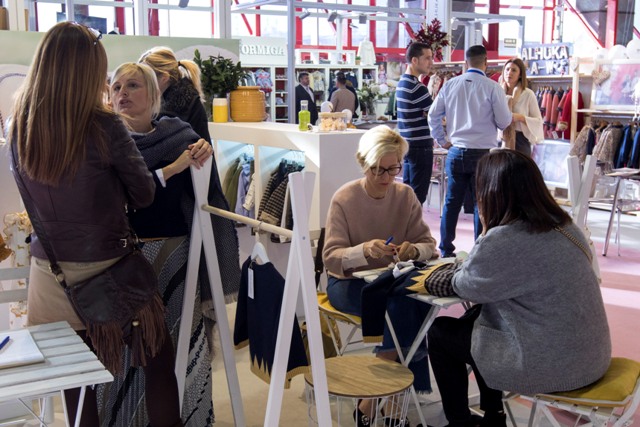 The numbers confirm that the healthy sense of business being done at this latest edition of FIMI, the International Fair for Children’s and Junior Fashion, was a fact. The 84th edition of the fair took place from 20th to 22nd January in the Glass Pavilion at Madrid’s Casa de Campo.  A total of 5,000 foreign visitors from the world of children’s fashion were recorded, from 46 countries, with the largest contingent  coming from the United Kingdom and Italy, although significant numbers of visitors came from Belgium, the USA, Holland, Ireland and Portugal as well.

FIMI has invested considerable effort to attract Spanish buyers and as a result the number of professionals visiting from all of Spain’s Autonomous Communities returned to 2015 levels. Exhibitors have spoken in very positive terms about the outcomes of their being at the fair. According to the representative of the Eva Jerez label, attending FIMI enables the brand to gain international exposure: “if you do not come to FIMI you do not make contacts with Mexico or Milan, which is what we did this time round.” The same representative added that this latest fair “was much busier than other times, so I am very happy with the outcome for us.”

Manufacturer Foque talks about the strength of the business opportunities at FIMI. For the Galician company “FIMI is the best place to publicise your new collections, primarily to the domestic market but also to an international audience.” They also said that taking part in the FIMI KIDS FASHION WEEK CATWALK shows provided them, “through the media and influencers, with a way for our designs to reach an audience beyond the exhibition venue.” Pedro Varón, representing JV José Varón, claimed that “new Spanish contacts” came onto the stand “from all over Andalusia, the Valencia region, Murcia, Alicante and Barcelona; and the foreign contacts from various countries such as Germany, Saudi Arabia, Ireland, Morocco, Portugal, the United Kingdom and Switzerland, so we are very satisfied with the level of interest our new collection generated.”

Manufacturer NUECES also had a positive experience at FIMI, with the team underscoring that “the fair was much busier than other years in terms of both international and domestic interest.” The company came to the fair with a pre-arranged schedule of  meetings with customers and “even so, we had a lot of visits from professionals who were going to open new shops and also buyers from countries such as Colombia and England interested in our collection.”

The next FIMI children’s fashion event will be its dedicated communion and occasion wear show, Día Mágico by FIMI. The fifth edition of the only international fair anywhere in the world that is dedicated exclusively to occasion wear takes place  on 12th, 13th and 14th May.

FIMI is already getting ready for its upcoming summer show. This will be the 85th edition of the fair and is being held from 23rd to 25th June. Exhibitors will be showing their collections for the 2018 spring-summer season. For the event’s director, Alicia Gimeno, “the great results from this latest fair are exciting and have inspired us to carry on working on new spaces and events, new ways of presenting fashion and pursuing our primary aim of growing our international profile…for this June’s edition. The children’s fashion industry is currently immersed in a process of profound change and FIMI needs to respond quickly to the new developments in the world of children’s fashion. This has to be our commitment as the only international trade platform in Spain that is specialised in children’s fashion, footwear and accessories.”